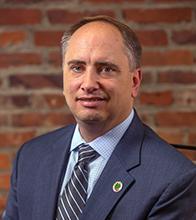 Hasseltine was the Chairman of the Sports Event and Tourism Association (Sports ETA, formerly NASC) from April 2013-April 2014 and served on the board for 10+ years. Hasseltine also serves on the Maryland Tourism Coalition Board of Directors, US Sports Congress Advisory Committee and serves in an advisory role with the Maryland Horse Industry Board.

Prior to coming to Maryland, Hasseltine had stints at the Kentucky Sports Authority (KSA) where he oversaw TEAM Kentucky. He played a significant role in and around the 2008 Ryder Cup and 2010 AllTech FEI World Equestrian Games. He worked at Greater Louisville Sports Commission, National Association of Intercollegiate Athletics (NAIA), and the National Collegiate Athletic Association (NCAA).

Hasseltine received his B.S. in Sports Management (and Communications) from the SUNY College at Cortland and is accredited as a Sports Tourism Strategist (STS) from Sports ETA.