In May, 2005 the Maryland Stadium Authority completed renovation of the 45,000 square foot interior of this historic building at the gateway to the Camden Yards Sports Complex. The exterior of the Station was refurbished for the opening of Oriole Park at Camden Yards in 1992 and again in 2003. However, the Station, unused since the 1980's, was in serious danger of suffering substantial structural damage and becoming unsalvageable unless steps were taken to preserve its core and shell.

The interior was restored to its former elegance, even utilizing some of the Station’s original fixtures such as the hanging lights, waiting room benches, historic doors and cornice work. Exact replicas of the cornices that could not be repaired were cast and it is virtually impossible to tell where the originals leave off and the replicas begin.

The Gentlemen’s Waiting Room and the Station’s lobby were restored to the original 1852 appearance. The basement of the Station was a real challenge necessitating the floor being dug out 2 feet to create sufficient headroom for optimum use. The old infrastructure was removed and a new structure constructed. The cellar space now will be utilized for the museum offices as well as exhibits and café.

The historic stairway to the second and third floors was restored, the original truss system, while no longer utilized as a support for the building, was retained and remains exposed as an architectural feature of Camden Station. 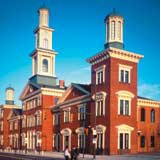 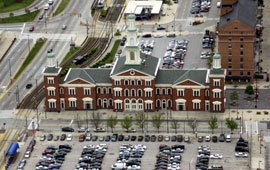