Getting Here:
The Camden Yards Sports Complex (CYSC) is located at a central crossroads where interstate highways, trains, bike trails and bus lines converge. The airport and Amtrak are connected by light rail and the Inner Harbor (a short walk from the complex) is accessed by water taxi. So while driving to an event at the CYSC is a popular option, you may wish to consider alternative transportation because it is so convenient. 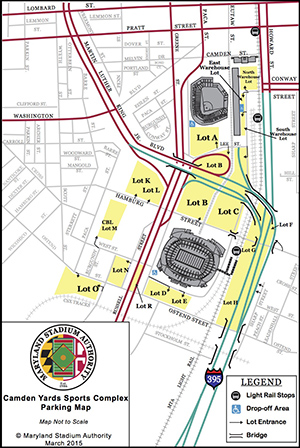 Parking:
Parking at CYSC is available but can change, as on game days or during special events and may be parking by permit only. For information regarding parking lot location, please see the map to the left for all of CYSC's parking lots.

Airport: Several hotels are located along the light rail line between the airport terminal and the stadium stops. Airport hotels provide shuttle service to the light rail station.

Bus: The Baltimore City bus depot at 2110 Haines Street is just south, and within walking distance, of the Camden Yards Sports Complex.  It offers direct service to Washington, New York, and Philadelphia several times a day via Greyhound and Peter Pan.  The Bolt Bus, with service to Washington, Baltimore, Philadelphia and Boston, leaves from Penn Station and is accessible to the CYSC via light rail.

Free Shuttle: The Charm City Circulator, a fleet of free Hybrid Electric vehicles, provides regular downtown service for residents and visitors to Baltimore.  The East-West Orange Route stops one block north of the complex on Pratt Street.  The North-South Purple Route has several stops along the Inner Harbor and Federal Hill a few blocks east of the CYSC.

Bicycle: For those in the Baltimore suburbs, the B&A, and BWI trails connect to light rail. There are racks at the stations, and bikes are permitted on board. In the city, the Gwynns Falls Trail, beginning at the I-70 park and ride, leads to M&T Stadium, where bicycle racks are also available.

Water Taxi: Whether you are visiting, or live in one of the many vibrant Baltimore neighborhoods, the Baltimore Water Taxi and Harbor Connector offers a quick and fun way to get around the harbor. The Harborplace landing is a 15 minute walk from the CYSC.